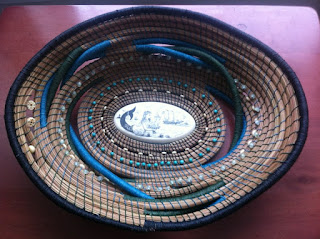 While I was in Merritt Island, Florida during February 2012, I decided to do a Sculptural style Pine Needle Basket using a reproduction Mermaid Scrimshaw center as a motif. I had gathered a great many really wonderful Florida Long Leaf Pine Needles from a park in Merritt Island after a great windstorm. After washing them in Dawn and laying them outside in the sun to dry, I imagined the center of the basket surrounded by some small tibetan bone beads I had. 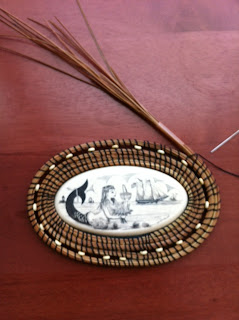 This is the beginning of the mermaid Basket using black Crawford's linen waxed thread. While this was all being pulled together, it is interesting to note that there were many manatees gathering in the canal next tothe dock of our rental house. The house was at the very end of a small offshoot canal off the Banana River waterway there. We were observing them, and feeding them some lettuce leaves. It is thought that sailors imagined the manatees as mermaids. They have trumpets like an elephant but sort of look like a hippo. One night very late, we heard lots of trumpeting in the canal. Waking up out of a dead sleep, I couldn't imagine what was going on. in actuality the bedroom was right next to the canal and we were sleeping virtual steps from about 50 gathered manatees. 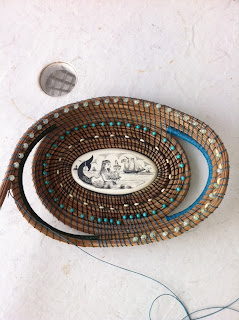 As it happened, and all of this happened while I was working on this basket, and as I started my first sculptural interpretations of waves and bubbles surrounding the Mermaid in the basket, I spoke with the owner of the house and I mentioned that on two subsequent evenings there was a great deal of commotion in the canal with the manatees. She told me that they came every year up into that canal to have their babies and what I was hearing was the births of their young!! 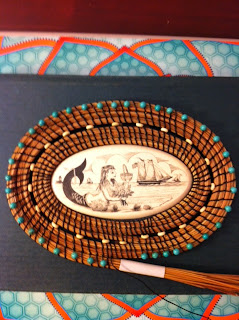 I could hardly believe it! I was witnessing a true miracle as I developed the Mermaid Pine Needle Basket. The reason I am telling you this is because this basket truly has the energy and miracles of Mermaids infused into it! It was a very exciting time! 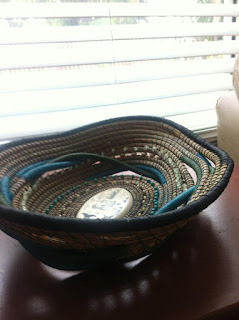 This is a side view of the finished Mermaid basket and really holds the flavor of those special times with the manatees on Merritt Island, Florida during the winter of 2012!

Posted by GloucesterWomanBaskets.blogspot.com at 5:30 AM