I learned how to make Nantucket Baskets on the Island of Nantucket off the Massachusetts Coast one fall day in 2004. My husband's construction company had business remodeling a private home and the Nantucket Whaling Museum in both 2004 and 2005. His company rented a home there for the workers and on the weekends they went home so we traveled to Nantucket either by small plane or ferry. We went to Nantucket quite a few times both on week days and week ends over a two year period.

I loved spending time on Nantucket Island. I loved the cobblestone streets, the architecture, the onion globe lights, and the history and traditions of the island. I loved the Fall and the Christmas season there and we even attended their Christmas Walk one year and saw a charming play in the local church.
After spending some times on Nantucket and imbibing the culture and flavors of the island.  I became intrigued with the Nantucket Baskets in the local shops. I had actually seen them often over the years and I had always been mesmerized by them. They were actually a popular preppy style item during the 1960's and women of a certain gold charm bracelet, Lilly Pulitzer dress style always seemed to have one on their arm. During this trip, I saw baskets in the shops and read that originally they had been made commercially on the Nantucket Lightships which were anchored off shore and used as Lighthouses on the Nantucket Shoals since the 1880's. The older baskets had perhaps originated from some designs or even been been copied from Native American baskets from the whaling days and even before that time on the Island. In the 1940's a talented basket maker named Jose Reis popularized the covered purse style. His original purses which sold for around $15 a the time are very collectible and valuable nowadays.

I picked up a copy of the Nantucket Mirror and Inquirer, the local newspaper that had been in business since 1821. I read the newspaper and it hung around on the table for a couple of days. I couldn't help but notice a 2 col and 2 inch ad on the back page. I looked at it over and over again. It was an advertisement for Nantucket Basket Making lessons from a man named Peter Finch. I rang him and made an appointment to have a lesson to make a basket. Since I didn't have a car I walked a ways to his grey shingle house with a clamshell driveway outside of town on Pollywog Lane. That is where I got my first mold, a 6 inch berry basket. I visited his home a few times for several lessons and even visited him once I had learned making them to show him my baskets. He told me I would never want to give away my first basket and I still have it, a 6" berry basket with a handle.
. 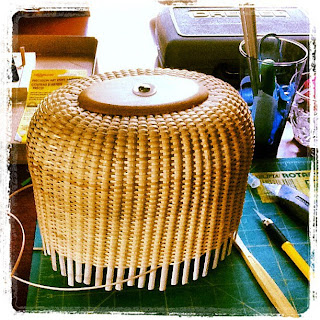 to the Black Whale Gallery in Hyannis ( blog post link http://gloucesterwomanbaskets.blogspot.com/2012/08/trip-to-black-whale-gallery-hyannis-ma.html ) and when it was time to leave I put the coordinates into my GPS for a place called  D.E.L.S. in Middleborough, MA, famous for making Nantucket Basket molds. I was keen to acquire a purse mold and after an amazingly complicated ride through the back roads of southern Massachusetts, I found the place, spent about three hours there and left with an 8" Nantucket Basket Mold and a few other supplies. I was psyched and on my way to making a Purse. 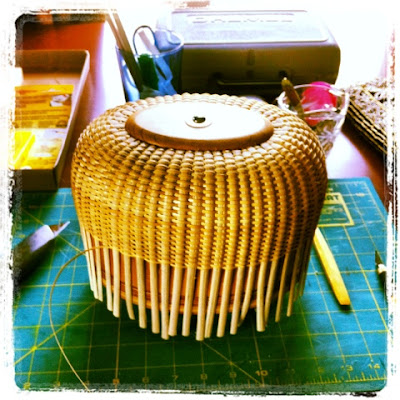 I tried to weave as tightly as possible over the wooden Mold I bought at D.E.L.S. It sure was hard getting it off the Mold. There must be a trick to it but I just pulled and pulled and it came off, what a relief.

After I got the body off the mold I had to shape the rims. I had bought pre shaped rims from D.E.L.S. but they still needed to be soaked in a bit of warm water and then shaped to the exact size of the basket. I glued them and let them sit for a day or so to dry. Then I glued and nailed them to the rims. I looked everywhere around the house for clamps to use. As you can see from the photos, I had quite a collection.

I did not have instructions on how to make the top part of the Purse. There is a little cut off mold for it and I was told it was hard to do. I am pretty much a novice Nantucket basket maker but was very interested in trying to do it. With a wing and a prayer I started it and it wasn't too bad.  It was fairly straight forward until I got to the rim part and there was a little bit of pushing and pulling the cane to get it to lay right as I molded the top rims onto the edge or lip of the basket and got it to match up exactly with the bottom.

Posted by GloucesterWomanBaskets.blogspot.com at 1:36 AM No comments: